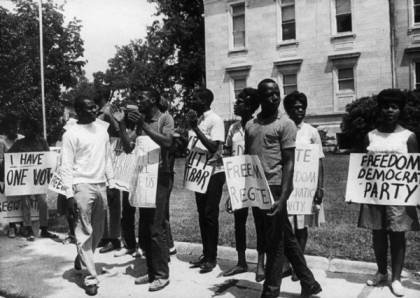 A group of young people on a sidewalk protesting with signs in support of the MFDP, 1964, MFDP records, WHS

Greenwood was a city in the heart of Mississippi’s cotton country – always a tough place on Black people. It became a tougher place to live when SNCC arrived. Even Black residents were wary of “outside agitators” and feared they would “start something” then leave. And it was not until Sam Block demonstrated his commitment to stay, even at the risk of his own life, that he began to be embraced. Cleveland Jordan, a minister who had participated in voter registration efforts in the 1950s and was a member of the Elks Hall, was one of the first to establish a relationship with Block, and it was through his connections that Block was able to able to been to effectively organize in Greenwood.

Although some of the older residents were more receptive to the work that SNCC was doing, the energy of young residents, such as June Johnson and Ida Mae Holland, was key to their success. Holland, 18 at the time, was drawn to the Movement when she passed the Freedom House and saw a Black typist, Emma Bell, hard at work. Bell had been part of the McComb Movement, and Holland was amazed to see a Black woman who didn’t look down at her keys even once as she was transcribing.  Holland was surprised to meet southern Blacks who were so articulate and was “pushed into the shuffle” with SNCC organizers.

Greenwood, MS was the self-proclaimed “Long-Staple Cotton Capital of the World,” and its position in the cotton industry gave the city significant economic and political power. Greenwood was one of the largest cities between Memphis and Jackson, and 30% of the state’s population resided within a 60 mile radius. It was also also one of the most violent areas of the state and home to a strong chapter of the Citizens’ Council. Half of Greenwood’s population was Black, but 90% of the area’s farmland was owned by whites. By 1946, only 26 of Leflore County’s 39,000 Black residents were registered, and none of them had ever voted. Although Blacks had organized an NAACP branch and a Citizens’ League in the 1950s, swift repression stifled local activism. The arrival of SNCC organizers in mid-1962 transformed Greenwood. When white officials decided to stop distributing surplus food in retaliation, SNCC’s commitment and support from key local people helped Blacks residents overcome their fears and join the Movement with newfound determination.