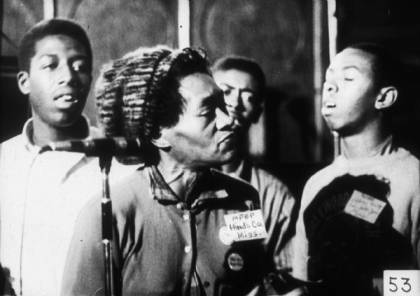 A woman wearing a knit cap and MFDP Hinds Co. badge stands in front of a microphone, 1964, MFDP records, WHS

Mississippi’s capitol city, Jackson, did not escape the surge of youth activism in the 1960s. In late 1962, members of the North Jackson NAACP Youth Council launched a boycott of downtown merchants for maintaining segregated facilities and discriminatory practices. The youth group was made up mostly of local high school and college students and was advised by John Salter, a sociology professor at Tougaloo College.

The boycott was timed to coincide with the Christmas shopping rush. Hitting the streets, the youthful organizers distributed leaflets, spoke in churches, telephoned people, as well as picketed the stores on Capitol Street – Jackson’s main commercial center. Tougaloo students Dorie Ladner and Charles Bracey picketed downtown and were arrested four days before Christmas. Their efforts paid off when Medgar Evers reported that the boycott was 60-65% effective.

Youth activity didn’t stop at boycotts. By the beginning of 1963, Tougaloo students began direct action protests at some of the downtown stores. Anne Moody and her classmates Pearlena and Memphis, sat in at Woolworth’s. At first local whites “didn’t know how to react. A few started to heckle …We were called a little bit of everything.” A couple of local boys even made a hangman’s noose out of the counter’s rope. Eventually the heckling turned violent and “all hell broke lose.” A man threw Memphis from his seat and slapped Anne in the face. Through all the excitement, whites were “smearing [the sit-inners] with ketchup, mustard, sugar, pies, and everything on the counter.” The violence only stopped when rioters started throwing ashtrays and glass figurines and the manager was forced to shut down store.

The Woolworth’s sit-ins transformed the boycott into a mass movement. Youth involvement in the Movement often pushed parents to become equally involved. When Medgar Evers was assassinated at the height of the Jackson Movement, Hazel Palmer had two kids in jail for movement related activity. “I had two children in jail, at that time, that was my second son Will, and Hattie was my second daughter. And no one know [sic] what a feeling that is, but it started me to thinking even deeper as saying, you know, what can I do, what can we do?”

Located in Hinds County, Jackson is the capitol of Mississippi, as well as its largest city. In 1960, it had a population of 144,442. Blacks made up roughly 36% of the city’s population. Jackson had a significant Black middle class made up mostly of teachers, ministers, and entrepreneurs, Black businesses thrived on Farrish Street. But this middle class rarely engaged in sustained civil rights activities, much to the displeasure of dedicated activists like Medgar Evers. Railing against complacent teachers and other professionals, Evers once claimed that “As much good as the NAACP has done to make the opportunity greater for teachers who once made $20 a month and are making up $5,000 [a year] now, we don’t get their cooperation.” Other professionals similarly failed to support the NAACP “for fear of losing face with the white man.” Evers found a warmer welcoming with high school and college students in the Jackson area. He worked patiently for years to develop strong NAACP youth councils across the state, including in Jackson.