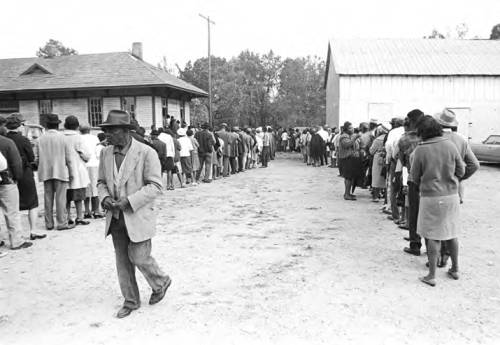 In 1935, the federal government under the Resettlement Administration bought a large plantation in the northwestern corner of Lowndes County, divided it up into small farms, and offered low-interest loans to hundreds of Black families who were working the land as sharecroppers. Matthew and Emma Jackson grew up working this land, in a community called White Hall. The two of them had married as teenagers, and the existence of White Hall  gave them the opportunity to buy their own land. In a place like Lowndes County that notoriously maintained white supremacy with violence, land ownership bought economic independence and a modicum of protection.

It was John Jackson, Jr., the youngest of the Jackson’s ten children, who brought SNCC into the family. He was a 16-year-old student who drove school buses for the county, and one day, he came across some young people frantically waving their arms on the side of a rural road, trying to flag down the bus. He stopped, and the SNCC organizers boarded, urging the students to come to a mass meeting. Not long after, John Jackson introduced them to his parents. Emma and Matthew Jackson had already attempted to register to vote in March of 1965, so when their son asked if the SNCC workers could stay in an unoccupied house they owned, the Jacksons agreed. “I took them as my children,” said Emma Jackson years later.

The family paid a price for their support of the Movement. John, Jr. lost his bus driving job, the family’s credit at the nearest white merchant’s shop dried up, and night riders shot into their house. “If you were a Jackson and you were from Lowndes County you were [considered] in that mess,” explained John. “Nobody [wanted] to fool with us.” But the Jacksons kept involving themselves in the Movement, committed to making their rural county a better place for African Americans.

Everything about Lowndes County, Alabama was rural. In 1960, Fort Deposit’s population of 1,446 made it the largest city in a county of 15,417 residents. Sprawling cotton plantations and sharecropper shacks spoke of an earlier era, while fields full of cattle gestured to major economic shifts underway in the Alabama Black Belt. Although eighty percent of residents were Black, none were registered to vote. The violence and terror local whites used to keep white supremacy in place, gave the county the nickname, “Bloody Lowndes.” But Black residents mobilized their meager resources to forge better lives for themselves under Jim Crow. They opened the Calhoun School to teach better farming methods and formed a land trust that helped black farmers buy their own land. Sharecroppers in White Hall, on the other side of the county, used a New Deal program to secure their dreams of land ownership. Economic independence and traditions of mutual aid laid the groundwork for African Americans to fight for political power after the passage of the Voting Rights Act.