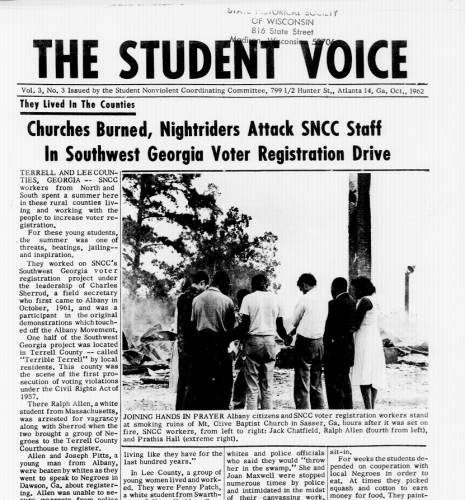 Lucius Holloway was born the son of sharecropper on a plantation in Chickasawhatchee, the southern part of Terrell County. Every day at noon, the white overseer stood outside the Holloway’s home and made his father leave his hot dinner to talk over the work that still needed to be done. One day, Lucius ran outside and confronted the white man about always making his father’s lunch go cold. “You better do something about that boy’s smart mouth,” the overseer told his father, and Lucius’s father slapped his son right there.

Lucius Holloway wanted more than what Terrell County, Georgia allotted for Black people. He joined the Army and served in Korea before returning home and marrying a beautician named Emma Kate. In the mid-fifties, Holloway became vice-president of the local NAACP, but his fellow members were so frightened that they only met in houses at night. They also tore up their NAACP membership cards.

Terrell wasn’t called “Terrible Terrell” or “T.T. Tombstone Territory” for nothing. When SNCC’s Charles Sherrod was jailed in Dawson, the county seat, Sheriff Z.T. Matthews told him, “Now remember. You left all your rights behind in Albany. I don’t want to hear nothing about freedom.” But Lucius Holloway – determined, unafraid, and already registered to vote – opened his two-bedroom house on Ash Street in Dawson to SNCC workers and introduced them to the community.

Eight miles south in the community of Sasser, Mt Olive Baptist Church was one of the churches that welcomed the Movement. Holloway would sometimes take SNCC workers along the dirt roads in that area to talk with people about registering to vote. In the summer of 1962, Mt Olive burned to the ground in retaliation for the mass meetings. But movement work continued nonetheless. “We’re getting out into ‘the rural’ these days,” white SNCC volunteer Faith Holsaert wrote the next summer. “We go with a local person and cover a road at a time, or a network of dirt roads … Mrs. Edwards, a farmer’s wife has taken us all over the fields behind their place, where we could never have found the little wood houses scattered over a three mile radius.”

Cotton plantations once covered Southwest Georgia, but by the mid-twentieth century, peanuts had replaced cotton in the fields. The unequal political and economic relationships between Black and white residents in Terrell County remained the same. In 1960, 52.8% of county’s 12,742 residents were Black, and only 51 of them were registered to vote. That same year, it became the first jurisdiction that the Justice Department took court action against under the Civil Rights Act of 1957, prohibiting county officials from engaging in discriminatory conduct against Black voters. Dawson was the only town of substance in Terrell County, home to five thousand residents. Besides being the county seat, it was one of the largest peanut centers in U.S. The Dawson Cotton Oil company produced peanut butter for the army and employed many of the town’s Black residents. When the Movement came to Terrell County, the company fired any employee who tried to register.